The world watched on in horror as the September 11 attacks unfolded. United Airlines Flight 93 was the only hijacked airplane not to hit its target, all thanks to a group of everyday heroes on-board, one of whom was Todd Beamer. "You ready? Okay, let's roll" were his last words caught during an on-board telephone…

Todd Beamer was a 32-year-old Oracle software account manager from Cranbury, New Jersey. He boarded United Airlines Flight 93 which left Newark International Airport bound for San Francisco at 8:43AM on the 11th of September, 2001. The flight had been delayed for 43 minutes due to heavy air traffic. He had planned to be home from a cross-country business trip in time to have breakfast with his family on the 12th of September, 2001

Instead, however, Todd found himself in the midst of a terrorist attack.

When the airplane was hijacked, Todd attempted to place a call through an on-air telephone but was routed to customer services instead. Lisa Jefferson was on the other end of the lime. Todd told her that there were four hijackers with knives that had taken over the plane. “He told me that he had dialed zero to report his plane was being hijacked and he wanted someone to talk to,” she recollected.

With the help of a flight attendant, Todd told Lisa how many passengers and crew were on board. He told Lisa that one of hijackers appeared to have a bomb strapped to his waist and he was standing guard in first class. He described how one flight attended had been stabbed to death (possibly Debbie Welsh) while both the pilot and co-pilot had been forced into the cockpit. He told Lisa that he was safe to talk because the terrorists were in the cockpit and first class. The passengers and crew had been forced towards the back of the airplane.

By this point, two airplanes had already crashed into the World Trade Centre and another had crashed into the Pentagon. Todd was seemingly unaware and asked Lisa if she thought the terrorists wanted money or ransom. Lisa didn’t inform him of the other hijacked airplanes, knowing it would terrify him even further.

After speaking with Lisa for several minutes, Todd’s calm voice went up in pitch. He said that the airplane had went up slightly before sharply turning. Todd asked Lisa if she would recite the Lord’s Prayer and Psalm 23 with him and she did. – “Though I walk through the valley of the shadow of death, I will fear no evil; for Thou art with me; Thy rod and Thy staff they comfort me.” In the background, Lisa heard other passengers joining in, as though for a last rite.

Moments later, the airplane took a dive, causing Todd to exclaim: “Oh God, Lisa!” When Todd told Lisa about his wife and two sons, she asked if he wanted her to try and connect him to them. Todd turned her down, saying he didn’t want to scare his wife, who was expecting their third child. Instead, Todd asked Lisa to let his family know that he loved them “if I don’t make it out of this.” Lisa promised she would.

Lisa continued to talk with Todd about his family before he told her that the passengers had decided to “jump” the hijacker with the bomb and try to take control of the plane. By this time, other passengers who were calling home had learned of the terrorist attack in New York. They knew that things were looking bleak and this was a life or death situation. Moments later, Lisa heard a commotion followed by a number of men and woman screaming. The last words she heard Todd say were: “You ready? Okay, lets roll!” She then heard more commotion before the line went dead.

United Flight 93 had crashed into a field around 80 miles southeast of Pittsburgh, killing all 44 people on board. The hijacker’s destination was the U.S. Capitol Building. Later, the cockpit voice recorder indicated just how close the brave passengers and crew came to taking back control of the airplane. The cockpit recorder picked up the sound of fighting as the airplane lost control at 30,000 feet. The sound of trolleys crashing and dishes being hurled and smashed can be heard while the terrorists scream at one another to hold the door. One passenger is heard shouting “let’s get them!” followed by more screaming.1

The final phone call has tormented Lisa. “When I hear ‘Let’s roll,’ I feel good because I know it was something I helped bring to the nation as a rallying cry, but other words I heard that day are what stay with me.” Throughout the heart-breaking phone call, Lisa heard other passengers crying, screaming for their lives, and praying. Lisa was later awarded with the “living hero” award from the American Bible Society in New York City. “I think all of the people on the plane were heroes — every last one of them,” she insisted. “I don’t consider myself a hero. I just did my job.”

The real impact struck home to Lisa the following week when the Chicago Sun Times ran photographs of the passengers and crew on the doomed flight. It was the first time that Lisa was able to put a face to the person with whom she had developed such an intense and profound relationship in such a short time. When she saw Todd’s photograph, Lisa felt ill, so much so that she had to take two days off from work.2

In the wake of the terrorist attack, Lisa called Todd’s wife, also named Lisa. “She called me crying. It was emotional as I explained to her the conversation I’d had with Todd. At first she was upset but later she thanked me for comforting him,” she said. “She called me a rock and a pillar of strength and thanked me for being there to comfort him.”3

The heroic acts made that day remain an iconic image of unity with Todd’s final words becoming a global catchphrase of heroic defiance against terrorism.

Still not buying it, the planes were grounded and swapped with drones and missiles. There was zero engines, people,or luggage in the so called wreckage, yet they found another scary guy Identification card. So people and 2400lb engines were just evaporated but a narrative ID sure made it through the horrendous crash? There’s no plane, no evidence of a plane, no seats, no wheels, no people, nothing just a small hole in the ground the size of a tomahawk missile and a Drivers license. These terrorists must have been the biggest pussies! Lock the door, wait there is no door… Read more »

You have done no real research if you’re just repeating what conspiracy theorist make up in their crazy heads. The evidence of the planes was everywhere. Please go look at what they actually recovered and don’t listen to people lying to you about it. 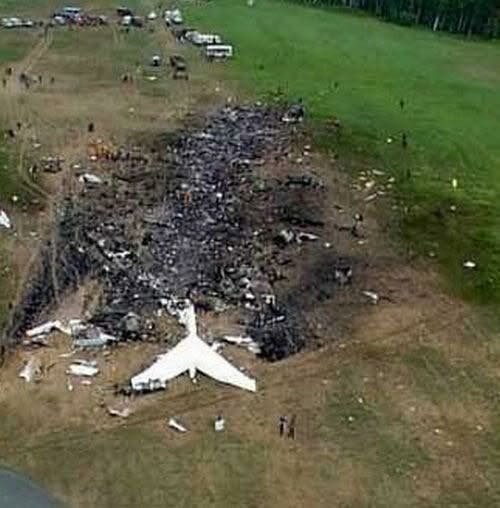 Pretty sure these are partial remains of Flight 93. Don’t ask me why I even bothered.

You don’t see a problem with that picture? Since when does a plane just “drop” out of the sky like that and “explode”? There are no indications of the plane crashing to the ground (skidding of the wheels or even the direction from which the plane came in) even if the plane hit nose first the entire thing would have been obliterated and the tail wouldn’t have been laid so perfectly where it’s at in the photo. Grow a brain.

You obviously didn’t lose anyone that day and are just a child. I pray that one day you grow up and find yourself without having to suffer , I too got caught up in the conspiracy theories when it first happened….I was a sophomore in high school at the time a d thought I knew it all . I wanted to blame someone . Wanted to blame those who judged others…like our government for instance. I even went all the way to Washington d.c on a bus from Dahlonega GA, an 18 hour BUS RIDE …to protest George W. BUSH… Read more »

Last edited 1 year ago by Ashley A Brady
3
Reply

ELM
Reply to  Ashley A Brady

Ashely, thank you for your post. I was in Network Management Training in The Netherlands the morning of 9/11. We had gone over the depot, and were joined by other Network Managers and Sys Admins from Brussels, SHAPE and Cheever’s Belguim. The Network was done, then we told to return to our duty stations. As we parked our vehicles we stopped by the PX for minute to see if any new IT stuff or TVs were in stock. It was around 0900 that morning in Europe. The base was locked down and nearly mile long road leading to Schinnen was… Read more »

Jamie
Reply to  Ashley A Brady

Very late to this discussion but I do feel that our military may have shot that plane from the sky to prevent even more death and destruction as their third target was unknown at that time. That is the only event from that dark, horrifying day that I feel our government may not have been honest about, although as heartbreaking as the deaths of those passengers are, I also can understand the reason for that gut wrenching decision was to prevent an even bigger loss of life. Just my uninformed opinion and gut feeling.
( Hello from a fellow southerner)

There’s no hope for people like this so just leave them right where they are. Incredibly gullible and easily duped they’ll believe the most ridiculous conspiracy nonsense out there. Facts and evidence mean nothing to them as they make up their own. its like water on a duck’s back. The people who feed them this garbage must laugh their asses off. I think it was Einstein who said there is a limit to human intelligence but no limit to human stupidity. RIP all you passengers and crew on that doomed flight and God bless the families.

Seems that there just aren’t enough people who can think critically anymore. What’s sad is that “they” think it’s wrong to question the narrative yet, it’s completely a dis-service and slap in the face to the lives who had been lost NOT to get to the truth of what happened concerning their untimely deaths. Flight Attendant, CeeCee Lyles, who was also a former police officer for 6 years, whispered at the end of her voicemail message to her husband, “it’s a frame”. But, no one has heard her full voicemail….until now.

Report: All Hell Is About To Break Loose In Georgia – Def-Con News

Where is this memorial?

Eyam is a small village in England which lies within the Peak District National Park....

In January of 1982, Muhammad Ali rushed to the scene of a suicidal man, threatening...