Located in San Francisco Bay, Alcatraz Federal Prison was in operation from 1934 to 1963 and was said to be America’s strongest prison. Alcatraz is also said to be one of the most haunted places in the United States.

Alcatraz Island, or The Rock, was home to a maximum-security federal prison known as the Alcatraz Federal Penitentiary. Located in San Francisco Bay, the prison was in operation from 1934 to 1963 and was said to be America’s strongest prison. Alcatraz is also said to be one of the most haunted places in the United States. 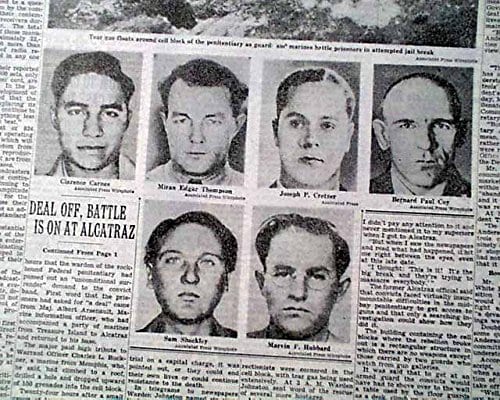 In the 1850s, the military built a fortress on the rock and this was the work place of labourers that didn’t make it into the gold mines. Many lives were lost during the building phase. In the late 1800s and early 1900s, Alcatraz Island was used to house tribal leaders of Arizona and Alaska. Eventually, Alcatraz Island became a prison. At first, it was a military prison, but in 1934, it became a federal prison – Alcatraz Federal Penitentiary. It was said that Alcatraz was impossible to escape from.  Those who attempted to escape were either shot dead, died while attempting to cross the cold and strong current, or were forced to surrender or be killed.1 Over the years, a total of 36 prisoners made 14 escape attempts; 23 were recaptured, six were shot dead, two drowned, and five are listed as “missing and presumed drowned.” The most notable escape attempts were the May 1946 attempt, which became known as the Battle of Alcatraz, and the June 1962 attempt. During the Battle of Alcatraz, two correctional officers and three prisoners were killed. Two of the surviving prisoners involved in the escape attempt were later executed for their involvement. In the June 1962 escape, three prisoners escaped out of their cells. While they – or their bodies – were never found, the FBI ascertains that they drowned in the icy waters of San Francisco Bay when they attempted to flee the island.

Alcatraz was designed to hold prisoners that caused trouble at other prisons, including some of America’s most heinous and ruthless criminals. It was a “last resort prison” to hold those who had no chance of rehabilitation. It was home for the worst of the worst and over the years, 1,576 murderers, mobsters, and everything in between called Alcatraz home.2 Arguably, the most infamous inmate was Al Capone who served four years. Some other notable prisoners included Doc Barker, George “Machine Gun” Kelly, Robert “Birdman of Alcatraz” Stroud, and Floyd Hamilton. Time served was especially hard because San Francisco’s cityscape reminded them of the freedom they had lost. George DeVincenzi, a guard at Alcatraz from 1950 to 1957, said the proximity to the bright lights and life of San Francisco drove the prisoners insane. “Yachts circled the island, and men on the third tier of C and B blocks could see girls in bikinis drinking cocktails,” he said. “It was so near, and yet so far…” One can only imagine the frustration an inmate felt while gazing at the city skyline or sunset over the fabled Golden State Bridge. The prison closed in March of 1963 due to high operational costs and budged costs. Furthermore, it had developed a bad reputation over the years. “Alcatraz was never no good for nobody,” said the Gregory Johnson, the night watchman.

Today, Alcatraz has become one of the biggest tourist destinations in the United States; tourists now flock to the very site that prisoners pined to flee.  Each and every year, around 1.4 million tourists take the ferry from Pier 41 at Fisherman’s Wharf over to Alcatraz Island to tour one of the world’s most feared prisons. Some visit to learn about the history of the prison and its occupants while others visit in the hopes that they will catch a glimpse of something mysterious. With such a violent and tragic history, it’s easy to see why Alcatraz is said to be reportedly haunted.

The most haunted spots in Alcatraz are said to be the Warden’s House, the hospital, the laundry room, and cell block C, where several prisoners died during the 1946 attempt. According to paranormal investigators, prisoners, and guards alike, cell block D which was solitary confinement – is the spot with the most paranormal activity. It’s said that the air in Cell block D is substantially colder than the rest of the prison. Once the windowless door was slammed shut in these cells, the inmate was enveloped in complete darkness and silence. A former prison guard said that when a prisoner was sent to cell block D, they screamed uncontrollably as soon as the door slammed behind them and all they could see was pitch black. Many prisoners claimed that they weren’t alone in these cells and that they often saw glowing eyes inside the cell with them. There was one certain prisoner that complained about seeing glowing eyes and screamed throughout the night. In the morning, he was found dead with strangle marks around his neck. John Banner, who was imprisoned in Alcatraz for four years, recalls the squeal of the wind at night, even to this very day. “Laying awake, listening to that wind, trying to hold on to what sanity I had left, I always thought of the brutality of that prison…” he reminisced.

Prison guards initially laughed at the claims of ghosts. However, some started to experience paranormal activity themselves; they heard bizarre sounds and felt unseen fingers touching them. The first warden even said that while conducting a tour, he heard a woman crying but when he looked to the source of the crying, there was no woman there. Erik Novencido worked as a night watchman for 10 years after Alcatraz closed its doors. One night, he said he took a picture inside the electroshock therapy room to show his friends who were curious about his job. When he developed the film, the photograph showed a face in the room staring right back at him. “Sometimes I was just overwhelmed by fear,” he said. Gregory Johnson, another night watchman of Alcatraz, said “I couldn’t imagine being out here at night without my gun.”3 While working at Alcatraz  during the night is particularly eerie, during the day can be just as terrifying. Veteran park ranger, Craig Glassner, said he had been afraid during the day while at Alcatraz: “Once on an isolated spot, I heard ‘whooooo, whoooooo,’ like someone blowing on a big Coke bottle,” he said. “I thought, ‘Do I run?’ Then I saw it was the wind blowing across the stanchions of a fence. It really freaked me out.” Mary McClure, who spent 12 years working the nightshift at Alcatraz, said: “Many times, at night in the cell house, I had the distinct sensation of being pinched on the butt.”

Prisoners and guards aren’t the only ones to have experienced something unexplainable. Visitors have claimed to hear mysterious clanging sounds, crying and screaming throughout their tours of the prison. In 2014, British tourist Sheila Sillery-Walsh claimed she captured a photograph of a spirit while visiting Alcatraz. As she glanced into one of the visitation waiting rooms, she snapped a photograph. The photograph depicts a ghostly figure staring through the glass window on the door. “When I glanced at the photo on my mobile, I saw this dark female figure in the picture. I looked at the window again and there was no one in the room,” Sillery-Walsh told the Daily Mail. “From that point onwards, I wasn’t interested in the Alcatraz tour anymore. I just kept looking at the picture over and over again.” Another tourist of visited Alcatraz in the 90’s was adamant that they saw the ghost of Robert Stroud, the Birdman of Alcatraz. “When Debra and I got to the Birdman’s cell, we heard canaries singing,” said Walter Zaheely. “And then we saw an old man sitting on the bed, reading a book.”4

Arguably, the most infamous ghost of Alcatraz is that of Al Capone… While his body lies in a modest grave in Mt. Carmel Cemetery in Hillside, Illinois, his spirit stills lurks within the walls of Alcatraz. During his confinement at Alcatraz, Al Capone was in the advanced stages of syphilis; he would often claim he was haunted by the ghosts of his victims and would babble and cry in his cell.5 Al Capone found comfort in his banjo and would sit on his bed playing for hours. As syphilis slowly ate away at his brain and he became more and more irrational, the prison guards would frequently hear him begging for mercy from the ghost of James Clark, one of the S. Valentine Day Massacre’s victims. He spent the last stretch of his prison sentence in Alcatraz’s infirmary. Following his release, fellow mobster, Jake Guzik said he was “nuttier than a fruitcake.” In 1969, a park ranger told a paranormal investigator that eerie banjo music can sometimes be heard emanating from Al Capone’s old cell and the shower room where he used to practice.

Whether or not you believe the paranormal tales from Alcatraz, there’s no denying that the island has a fascinating history. Alcatraz even offers night tours for those who are feeling extra adventurous. Haunted? Maybe… Dark and creepy? Most definitely. If you visit and experience something unexplainable, make sure to let us know!

I visited in 2007. There was an eerie feel to the place but I didn’t see anything or experience anything weird. I don’t doubt it is haunted though.

There’s a very good chance that the Anglin brothers and Frank Morris not only escaped but made it out of the country to Brazil. I hope they did. Supposedly the “mysterious” boat mentioned belonged to a childhood friend who literally towed them away from Alcatraz. Of COURSE the FBI isn’t about to admit that they just plain screwed up!
https://www.history.com/news/alcatraz-escape-new-evidence-anglin-brothers

I worked on Alcatraz island for two years in 2012 -2013. I have hundreds of photos of ghosts and recordings! The old prison all the way down to the original citadel which sits under the island, a place no tourist has ever been allowed.
Ghosts are real and I can prove it!

You should release the images and recordings

Are you sure Dude

I used to work at Alcatraz pretty fascinating!

Plus My Great Great Grampa Use to work at Alcatraz my great-grandma has them in her safe pics of Alcatraz they are so cool there was a picture of Al Capone not a photo-shopped real photo of him in the cafeteria in Alcatraz!!!!!