The Bizarre Case of Pauline Picard

In April 1922, two-year-old Pauline Picard disappeared from her home in Brittany, France. She was found in another town 200 miles away... or so they thought.

This article was written by Renee Reeves who was assisted in research and translation by Ren.

In April 1922, two-year-old Pauline Picard disappeared from her family’s farm in Brittany, France. The village of Goas-Al-Ludu flew into a flurry of activity, with more than 150 people combing the Picard family farm and surrounding woods for signs of the missing toddler. When they couldn’t find a trace of the girl, searches petered out. Pauline’s grieving family assumed she’d wandered off and met her end from to wild animals or the elements.

A month later, the police arrived at the Picard family farm with a photograph of a little girl who’d been found wandering alone in a Cherbourg, a town about 200 miles away. Her relieved parents agreed that, yes, the picture was of Pauline. How she’d gotten so far from home was anyone’s guess, but they immediately took a train to the town of Cherbourg to retrieve their missing daughter.

When the Picards met the girl, though, they weren’t so confident. She looked like an underfed version of Pauline, but she didn’t seem to speak Breton, the language the Picards spoke at home. While the Picards lavished affection on her, she didn’t seem to recognize them, instead showing them the same babyish kindness she showed strangers.1 The Picards decided to bring her home, hoping that their little Pauline was just traumatized and malnourished and that she’d quickly come to herself.

Uncertainty surrounds the next few weeks. Newspapers report that she spoke some Breton, then report that they were mistaken and the girl was only babbling.2 One paper reports the Picard parents were certain the child was Pauline while another reports their misgivings.3 The family couldn’t understand how Pauline turned up 200 miles away from home a month after disappearing, but stranger things had happened. Pauline’s parents accepted that, strange or not, this was the best explanation for Pauline’s disappearance — until a cyclist found a tiny, mutilated body near the Picard’s home.4The body lay naked and decomposing in an area had searchers canvassed many times. The head, hands, and feet were missing. Next to the corpse lay Pauline’s clothes from the day she went missing, neatly folded. Also found nearby: a man’s severed head, partly eaten by foxes.

For the second time in a year, Goas-Al-Ludu was thrown into chaos. Villagers and police took turns standing watch over the corpse during the three long days it took the prosecution department to arrive.5 This dead child, her parents feared, was the real Pauline. A seemingly closed case now blossomed into three separate cases: who was the dead girl? Who did the head belong to? And who was the girl who had lived with the Picards for the past three weeks?

Wild chatter swirled around the village about who could have murdered the child. Police investigated an umbrella salesman who worked for the family, a man named Christophe Keramon. He ate breakfast with the Picards the morning Pauline disappeared and was overly fond of Pauline, often cuddling her and telling her he’d “find her a good home” in another town. 6Pauline’s parents had left the two alone together on the day the girl disappeared — someone even heard Keramon tell Pauline she was going with him. The police arrested him but eventually released him, as his alibi checked out.

Other townspeople suspected a man named Yves Martin. Martin visited to the Picards’ farm before the body was found and asked if the Cherbourg girl was really Pauline. He then cried “God is fair, I am guilty” and left abruptly.7 The next day, he was committed to an asylum in such a state that police were unable to interrogate him. Although this story seems to imply that he had a breakdown due guilt over Pauline’s death, the media later reported that he’d suffered a traumatic brain injury prior to his dramatic announcement.8It’s just as likely that his ravings were not a confession of guilt. 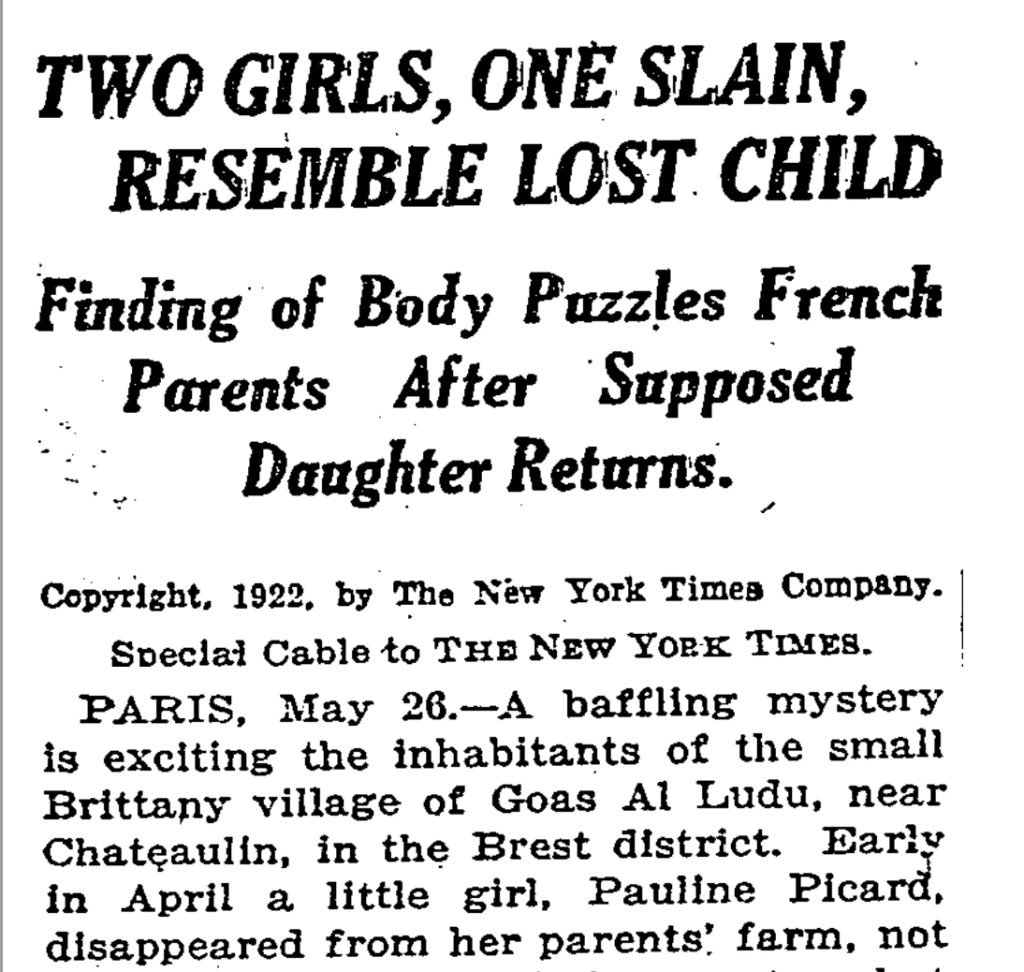 An Algerian newspaper claimed that, while Martin hadn’t killed Pauline, he did know who had: someone in her family who’d abused her, a recluse named Ronge Remorpy.9 French newspaper Le Journal also pointed the finger at Pauline’s family, saying that she had been abused by a family member. They imply that her father Francois, who apparently had frequent violent outbursts, killed her.10 No other sources mention anyone named Ronge Remorpy. Perhaps Yves Martin had witnessed the murder but invented a perpetrator — or perhaps he wasn’t involved at all.

According to a rather romantic theory that gained popularity with townsfolk (but not the police), a rich couple kidnapped Pauline to replace their own daughter.11The supposed motive? They would lose their inheritance if news got out that their daughter was dead. The little corpse was their own daughter. This dovetailed nicely with reports that two mysterious strangers had watched Pauline the day she disappeared, but the theory lacked both leads and evidence.

While police and the Picards agreed that the body must be Pauline’s, they were no closer to understanding her fate. Medical examiners couldn’t decide whether the girl had died due to violence, animals, or the elements. They eventually concluded that Pauline had wandered away perhaps during a tantrum, and frozen to death. How her body appeared in an area searched “so well that if someone had lost a wallet, it would have been found”, in the words of a local priest, couldn’t be explained.12Locals, including some police, continued to suspect homicide, pointing out that it was unlikely for animals to eat the head and extremities before eating the abdomen.

The Picard family quietly decided that the Cherbourg girl wasn’t Pauline. The whole thing seemed too far fetched, especially now that the girl seemed younger than Pauline. She was given the name Marie-Louise Pauline and sent back to Cherbourg, where she was entrusted into the care of the Franciscan Sisters of Notre-Dame-du-Voeu. She passed away in the care of the Sisters during the 1924 measles epidemic.13

The Picards buried the dead girl’s remains in the local cemetery under the name Pauline Picard. Later, her parents were buried with her. Her death date is listed as April 6, 1922, the day she disappeared.

Yes but she too probably would’ve been abused as little Pauline allegedly was…its all so twisted and sad. Who folded her clothing? The killer? Who’s head was that there? Her guilty killer who committed suicide…guess we will never know.

Committed suicide, cut his own head off & transported his body to an, as yet, unknown location?
Sure, sounds plausible.

this reminds me of changeling

Which is based on a very similar, very true story.

How could she have been killed by the elements or wildlife if her clothing was folded beside her..??

According to an unofficial count, almost 800 deaths have been documented at the Grand Canyon....

Britney Beers, 6, disappeared while sitting on a bench in front of the apartment where...